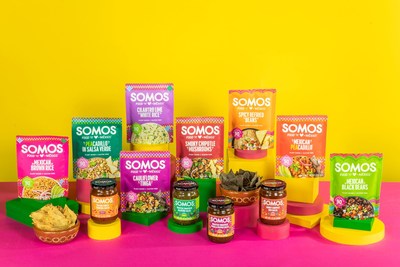 SOMOS Founder & Executive Chairman and KIND Snacks Founder Daniel Lubetzky explains, «Until now, Americans have had to dine out to enjoy a real Mexican meal. At home, options have been limited to foods that don’t actually exist in Mexico like fluorescent molded hard-shell yellow corn tortillas. SOMOS was created using inspiration from family recipes that have been passed down through generations and will introduce people to true Mexican cocina staples.»

SOMOS is now taking wholesale orders for its inaugural product range of shelf-stable, slow cooked Mexican foods for easily preparing dishes like tacos, tostadas, nachos, or chilaquiles the Mexican way. The brand offers a variety of rices, beans, tortilla chips, salsas, and plant-based entrees – including smoky chipotle mushrooms; cauliflower tinga; and two kinds of ‘pea-cadillo,’ SOMOS’ own plant-based alternative to ground beef – which can all be mixed and matched to create tasty, homemade Mexican meals.

Following its commitment to connecting American tables to food straight from the heart of Mexico, SOMOS is produced entirely in Mexico and sources the majority of its ingredients from local Mexican family farms. All foods are plant-based, gluten-free and non-GMO, providing a refreshing alternative to what is currently on shelves today. SOMOS pouches are microwavable and ready to heat and eat in 90 seconds (or to be prepared via stovetop), leaving more time for soaking up time together post-dinner – a tradition that Mexicans call ‘sombremesa.’

Launching on eatsomos.com in January 2022, the brand’s direct-to-consumer kits will supply the core ingredients necessary to make a restaurant-quality Mexican meal, which might otherwise take hours to prepare, in ten minutes or less. For hungry consumers looking for a first bite, SOMOS’ «Unusually Thick & Crunchy» stone-ground white corn tortilla chips are now available to try alongside the brand’s four hearty salsas that combine Mexican peppers with freshly grown Mexican tomatoes blended with onion, garlic and spices.

Says SOMOS Co-founder and CEO Miguel Leal, «While Americans often think of Mexican as being heavy on meat, cheese and greasy sauces, real Mexican food celebrates the natural vegetables, grains and legumes of its diverse geographies. SOMOS is committed to preserving the integrity of these ingredients and preparing our foods as close to the traditional way as possible, helping consumers make and enjoy delicious meals that are clean, sophisticated, and full of flavor.»

SOMOS, which means «We Are» in Spanish, aspires to connect Mexico and the world by replacing a narrow view of Mexico with one as diverse as its food. SOMOS is currently cooking up ways to support Mexico’s emerging artists, chefs, musicians, and social entrepreneurs starting in 2022.

About SOMOS
Founded by three Mexican amigos who put KIND Snacks on the map, SOMOS is a brand of delicious food from the heart of Mexico, created to replace fake Mexican food dominating American pantries with real Mexican – made in Mexico, like Mexicans make it. SOMOS creates plant-based, slow cooked Mexican foods that can be mixed and matched to prepare delicious meals like tacos, tostadas, nachos, or chilaquiles in ten minutes or less. SOMOS promotes a social mission to connect Mexico and the world by providing a platform for Mexico’s emerging artists, chefs, musicians, and social entrepreneurs to showcase their talents. Visit us at eatsomos.com and follow us at @eatsomos.

About Daniel Lubetzky
KIND Snacks founder Daniel Lubetzky is a Mexican-American social entrepreneur working to build bridges across lines of difference. With the introduction of KIND‘s fruit and nut bars in 2004, Daniel created an entirely new snacking category. He has since grown KIND into a multi-billion-dollar global health and wellness brand known for its promise to lead with nutritionally dense ingredients and for its mission to make the world a little kinder. The son of a Holocaust survivor, Daniel’s civic initiatives Starts With Us, OneVoice, and Empatico seek to increase appreciation for our shared humanity. Daniel is the author of The New York Times bestseller Do the KIND Thing and a recurring shark on the ABC television series Shark Tank. Learn more at daniellubetzky.com and follow Daniel at @daniellubetzky.

About Miguel Leal
Miguel Leal is a Mexican-American food industry veteran who comes to SOMOS following two years as the Chief Marketing Officer at Cholula; he previously helped accelerate growth at KIND Snacks, where he served as CMO for three years. Miguel was previously at Danone and Diamond Foods working on the Kettle brand. His food career began at PepsiCo’s Frito-Lay managing the Lay’s potato chip category for nearly three years. Miguel moved to the United States to receive his MBA from The Wharton School at University of Pennsylvania. Born and raised in Monterrey, Mexico, Miguel’s favorite Mexican meal is home-cooked picadillo with rice and beans.

About Rodrigo Zuloaga
Rodrigo Zuloaga is a Mexican food industry expert with an extensive background in product development. Most recently, Rodrigo has dedicated his time to fostering employee ownership as a means to shared prosperity and improving working conditions in Mexico and Latin America. Prior, Rodrigo spent nearly 13 years building KIND’s New Product Development team, leading the product portfolio expansion from ten to over seventy-five products. His interest in food first began as a teenager and led him to launch a company manufacturing Mexican gourmet cooking sauces using his mother’s recipes. Rodrigo received his B.A. in International Business at ITESO University. Born in Mexicali, Baja California Norte and raised in Guadalajara, Jalisco, Rodrigo is passionate about music and creating social impact through business. His favorite Mexican meal is tostadas with refried beans and cauliflower tinga.