COLUMBUS, Ohio, Aug. 10, 2021 /PRNewswire/ — SafetyNest, a nonprofit organization created by Branch Insurance to help the un- and underinsured, today announces a partnership with NFL superstar Myles Garrett, to tackle the issue of uninsurance in the U.S. According to the Insurance Information Institute, uninsurance impacts about 1 in every 8 U.S. drivers, and in some states, more than 1 in 4. Even worse, many believe the pandemic has only contributed to the problem. SafetyNest, which is on a mission to eliminate uninsurance in the U.S., believes that, with the advocacy of Myles Garrett, it can bring about awareness and introduce solutions to the issue that predominantly affects low-income communities. 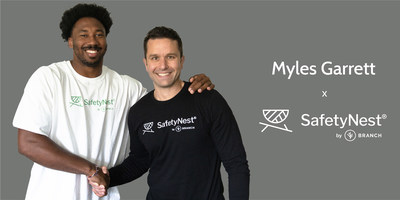 «When you consider that fewer than 4 out of 10 Americans have $1000 in savings, you begin to understand why insurance would take a back seat to other more important expenses. It’s not that the uninsured don’t want insurance, it’s largely that they can’t afford it,» said Charlie Wendland, President of SafetyNest. «Those who can’t afford insurance, certainly can’t afford the fees they often incur from driving without insurance. It’s all part of a vicious cycle that ends in financial devastation.»

Over the last several years, Myles has demonstrated an incredible dedication to community both on and off the field, including his work with Waterboys, which seeks to bring clean drinking water to communities in need, as well as working with the Cleveland Hope Exchange and local businesses during the pandemic, and supporting various social justice issues in his Cleveland community and across the country. Through this partnership with SafetyNest and Branch Insurance, Myles seeks to create meaningful change in his community by ensuring everyone has the insurance they deserve.

«Giving back to my community has always been important to me. When I was first introduced to SafetyNest and its mission, I couldn’t believe how much uninsurance silently affects the communities around me,» said Myles. «I feel both honored and excited to join the fight and bring real solutions to those who can’t afford insurance.»

«The insurance industry is broken and consumers pay higher prices as a result, which only makes the uninsurance problem worse. When insurance is too expensive, people go unprotected, and communities suffer,» shared Steve Lekas, Cofounder and CEO of Branch Insurance. «Branch is working to make insurance more affordable so that everyone can be insured, and we feel extremely grateful that Myles is partnering with our nonprofit SafetyNest to help make that a reality.»

SafetyNest was created in 2019 by startup Branch Insurance to solve the financial exclusion problem in insurance. Since its inception, SafetyNest has rolled out a series of programs to combat uninsurance and has also spearheaded a research project in collaboration with The Risk Institute at the Ohio State University to better understand the root causes of uninsurance. During its most recent program, SafetyNest responded to the financial crisis brought on by the pandemic by helping more than 100 people from six states to either maintain or obtain insurance. Through its partnership with Myles Garrett, SafetyNest believes it can make a real impact on the uninsured community both locally and across the country. To learn more about Myles Garrett and SafetyNest, head to Myles.OurBranch.com.

About SafetyNest
SafetyNest is a 501(c)(3) nonprofit organization, created and funded by Branch Insurance, which is on a mission to eliminate the financial exclusion problem in insurance. Through its various programs, SafetyNest works to combat uninsurance by helping those who are un- and underinsured get the coverage they need. SafetyNest was founded in 2019 and is headquartered in Columbus, Ohio. For more information about SafetyNest, visit SafetyNest.org.

About Branch Insurance
Branch Insurance is on a mission to make insurance more accessible and affordable for everyone by tapping into the power of community. Utilizing innovative technology, Branch has made bundling home and auto insurance online quicker and easier than ever before. Branch was founded in 2017 by insurance veteran Steve Lekas and tech entrepreneur Joe Emison, and is headquartered in Columbus, Ohio. Branch is underwritten by the Branch Insurance Exchange and General Security National Insurance Company (GSNIC) and backed by SCOR SE, all A-rated insurance entities. To learn more, visit OurBranch.com.