FOUNTAIN VALLEY, Calif., July 30, 2021 /PRNewswire/ — Hyundai has teamed with Univision as the new presenting sponsor of Sábado Futbolero (Saturday Soccer). Hispanic Americans are a pivotal force in soccer’s growing influence throughout the U.S., and the campaign, #BecauseFútbol, features three new Spanish-language TV spots. The campaign highlights the fan rivalry between Chivas and Cruz Azul of Liga MX, the most-watched club soccer competition in the U.S. The sponsorship and new ads kick off on Saturday, July 31 for the start of the 2021 Torneo Apertura. 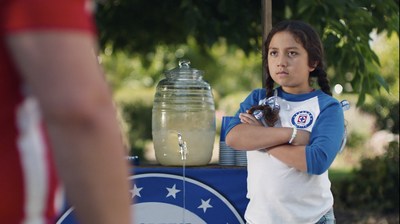 «#BecauseFútbol perfectly describes the acts of fandom inspired by Mexico’s top sports league,» said Angela Zepeda, CMO, Hyundai Motor America. «We wanted to join in that spirit with a campaign that entertains fans and connects with Hispanic audiences each week on Univision’s broadcast.»

«We are thrilled to work with a partner in Hyundai that recognizes and shares the passion our audience has for soccer,» said Dan Riess, executive vice president, Chief Growth Officer at Univision. «From strategy to creative to content to social, Hyundai tapped into our full suite of in-house capabilities to serve as a true end-to-end solution, helping to create a campaign that connects with our fanáticos.»

The new Hyundai TV spots, directed by Argentine Martin Kalina of Pulse Films and edited by Kyle Brown of Exile, include:

During the Sábado Futbolero broadcast, Hyundai will also have a custom opening sequence that was developed in collaboration with Univision, logo placements on various graphics and in-game virtual ads. The integrated campaign will include custom social content and a call to action for fans to share their club passion. #BecauseFútbol was conceived and executed by Hyundai’s agency of record, INNOCEAN USA.

Hyundai Motor America
Hyundai Motor America focuses on ‘Progress for Humanity’ and smart mobility solutions. Hyundai offers U.S. consumers a technology-rich lineup of cars, SUVs and electrified vehicles. Our 820 dealers sold more than 620,000 vehicles in the U.S. in 2020, and nearly half were built at Hyundai Motor Manufacturing Alabama. For more information, visit www.HyundaiNews.com.