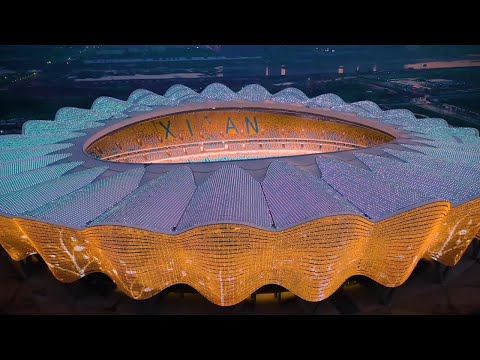 China’s 14th National Games are scheduled to be held between Sept. 15 and 27 in Shaanxi province. The National Games are China’s largest multi-sport event at the highest level of athletic competition. Therefore, Xi’an, the main host city of this year’s Games, has been attracting a lot of attention.

Xi’an is one of the 10 oldest cities in the world. Around 1.15 million years ago, Lantian man, a subspecies of Homo erectus, lived in the area, marking one of the earliest stages of human civilization. Historically known as Chang’an, the city served as the imperial capital of 13 dynasties, including the Qin, Han and Tang. For several millennia, Xi’an has created a rich sporting heritage, represented by Chen-style tai chi, Xingyi Six-harmony Broadsword and Fuxing lion dance. Its time-honored history has also added charm to modern sporting events. For example, the Xi’an City Wall International Marathon has been held for more than 20 years on the ancient city wall constructed during the Ming dynasty.

The upcoming 14th National Games will also feature a blend of history and modernity. The Xi’an Olympic Sports Center, the venue for the opening ceremony of the Games, is shaped like a pomegranate flower, which bears witness to the development of the ancient Silk Road. Xi’an was the starting point of the ancient Silk Road. Through this route, the pomegranate was introduced into China and its flower became the official city flower of Xi’an. The pomegranate flower-shaped stadium is equipped with a range of modern technologies. It is the first sports center in China to feature full 5G network coverage, and utilizes VR, AR and other new technologies.

In its preparations for the Games, Xi’an also enhanced its urban infrastructure: Construction of metro lines accelerated; several expressways and interchanges opened to traffic; and Xi’an Railway Station was expanded, more than doubling the number of passengers it can handle annually.

At the same time, Xi’an has been injecting new vitality into its historical and cultural heritage. Heritage parks at the Xiaoyan Pagoda and Duling Mausoleum sites opened to the public; the «Belt and Road» Urban Exhibition Center and Cultural Exchange Center will be completed soon; and many night runs have been held at the city’s landmarks, such as the Daming Palace National Heritage Park. All these demonstrate the unique charm of Xi’an, where history and tradition blend with modernity and fashion.

Despite the impact of COVID-19, Xi’an completed its preparations and will hold the Games as scheduled, sending a cordial invitation to the world with perseverance and practical actions.

Xi’an looks forward to meeting guests this September for the 14th National Games!