NASHVILLE, Tenn., Aug. 11, 2021 /PRNewswire/ — 6th & Peabody, home of Nashville’s Ole Smoky Distillery and Yee-Haw Brewing Co., announced their formal partnership today with OutKick to create the 6th & Peabody Broadcast Studio, a state-of-the-art studio that will host one of the network’s daily shows, OutKick 360, live in the heart of Music City. 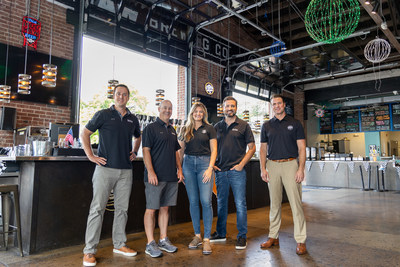 OutKick 360 is the first show to occupy the 6th & Peabody Broadcast Studio and is hosted by popular long-time Nashville sports radio personalities Jonathan Hutton, Chad Withrow and Paul Kuharsky and broadcasts live weekdays from 11 a.m. to 1 p.m. Central to YouTube, Twitter, Facebook and Rumble. On August 30, the show will transition to a new time of 2 p.m to 5 p.m Central, as OutKick continues to explore opportunities in radio distribution.

On the launch of the new studio OutKick Founder and President, Clay Travis said, «We could not be more excited to launch a partnership with 6th & Peabody. This studio marks the next chapter in OutKick 360’s exciting history and continues OutKick on its path of exponential growth. I look forward to this partnership with our friends at 6th & Peabody, as we watch and enjoy our audiences being able to show up and see our shows in person.»

Additionally, Hutton, Withrow and Kuharsky will produce podcasts featuring sports and entertainment personalities, video programming and introduce game day promotions and parties throughout the week from the 6th & Peabody Studio. Their move to the new studio will allow for live audiences to engage with the show like never before.

«Bringing the set of OutKick 360 and accompanying podcasts into 6th and Peabody reminds me of the Today Show, except it’s in a brewery, distillery, and sports entertainment experience in Nashville. This is an epic partnership for one of OutKick’s fastest growing shows, and selfishly, I’m looking forward to having a Yee-Haw Beer or some Ole Smoky Moonshine and watching live,» said Zac Litwack, Partner at Savage Ventures, who currently assists Fox in OutKick operations.

«This new partnership is a great fit for 6th & Peabody. Not only have we partnered with the Tennessee Titans, Nashville Predators, and the Nashville Sounds since our opening in 2019, we have also become ‘the place’ to watch sports in Nashville. Our beer garden and indoor seating have some of the largest jumbotrons in town. Now, our guests can experience the OutKick 360 show live each afternoon at 6th & Peabody,» said Adam Warren, Managing Director & General Counsel of 6th & Peabody.

About Ole Smoky® Distillery LLC
Ole Smoky is the leading distiller of premium moonshine in the world, the leading craft distiller in the US and the first federally licensed distillery in the history of East Tennessee. Founded in 2010, Ole Smoky’s roots are traced to the Smoky Mountains’ earliest settlers, families who produced moonshine with enduring pride and Appalachian spirit.

Today, Ole Smoky retails in all 50 states and over 20 countries around the world and offers more than 25 creative moonshine flavors and 17 inventive whiskey flavors. Ole Smoky can be found in liquor stores nationwide, as well as at the company’s four famed distilleries in Tennessee, The Holler and The Barrelhouse in Gatlinburg, The Barn in Pigeon Forge, and 6th & Peabody in Nashville. For more information, please visit olesmoky.com and follow Ole Smoky on social media @olesmoky.

Yee-Haw is an award-winning brewery with several U.S. Open Beer Championship Awards, along with the flagship Dunkel winning a World Beer Cup bronze in 2016. Built on a strong foundation of core beers and rotating seasonal beers, each location has experienced brewers on-site that develop specialty craft beers reflective of their local markets.

Yee-Haw Brewing is about more than beer, it’s about creating an environment for good times with good people. Yee-Haw’s focus is to create a space where communities have a place to gather and create memories with family and friends, old and new. For more information, please visit yeehawbrewing.com or follow Yee-Haw on social media @yeehawbrewing.

About OutKick
OutKick, a subsidiary of Fox Corporation, is a national digital media platform led by Clay Travis that produces and distributes engaging content across sports, politics and pop culture. Audiences have ample opportunities to consume OutKick content daily across video livestreams, podcasts, radio, website, and socials. In a short time period OutKick ascended to a position of leadership in the sports wagering affiliate category and continues to hold that position in an ever-growing market. For more information, please visit www.OutKick.com.